Did You Know that God so Enjoys Your Company that He Dances?

March 26, 2014
Blogger Import
VFNKB
LISTEN NOW! Greg, John, and Pat discuss how God dances over you as they discuss Dutch Sheets new book The Pleasure of His Company.  “No God is not like us, WE ARE LIKE HIM; created in His image and His likeness.”  Dutch says.  They continue to discuss how  just this thought alone would ruin some people’s perception of God but the truth is that God is not like us we are like Him.  We are made in the image of God.   If we feel emotions like pain and joy we can only imagine the depths and levels of emotions that God feels.   We must understand we cry because God cries’ we laugh because He laughs.  God is so full of emotion for his creation and loves each person so very much in fact before we turned our hearts to Him he loved us enough to die for us.  God is excited over you and filled with exuberant joy for his creation and the word of God tells in in Zephaniah 3:17 that God rejoices over you with joyful songs.  He dances over you.  If God be for you who can be against you?
FOOT PRINTS IN THE SAND
by Dutch Sheets

You’ve probably read the popular “Footprints” poem, which depicts the Lord carrying us through difficult seasons of life. I like the following version even better.
A woman had a dream in which her life with Jesus was pictured by footprints in the sand.
For much of the way, the Lord’s footprints went along steadily, consistently, rarely varying in the pace. Her prints, however, were in a disorganized stream of zigzags, starts, stops, turnarounds, circles, departures, and returns. For a long while they seemed to go like this. But gradually, her footprints came in line with the Lord’s, eventually paralleling His consistently. She and Jesus were walking as true friends.
This seemed perfect, but then an interesting thing happened; her 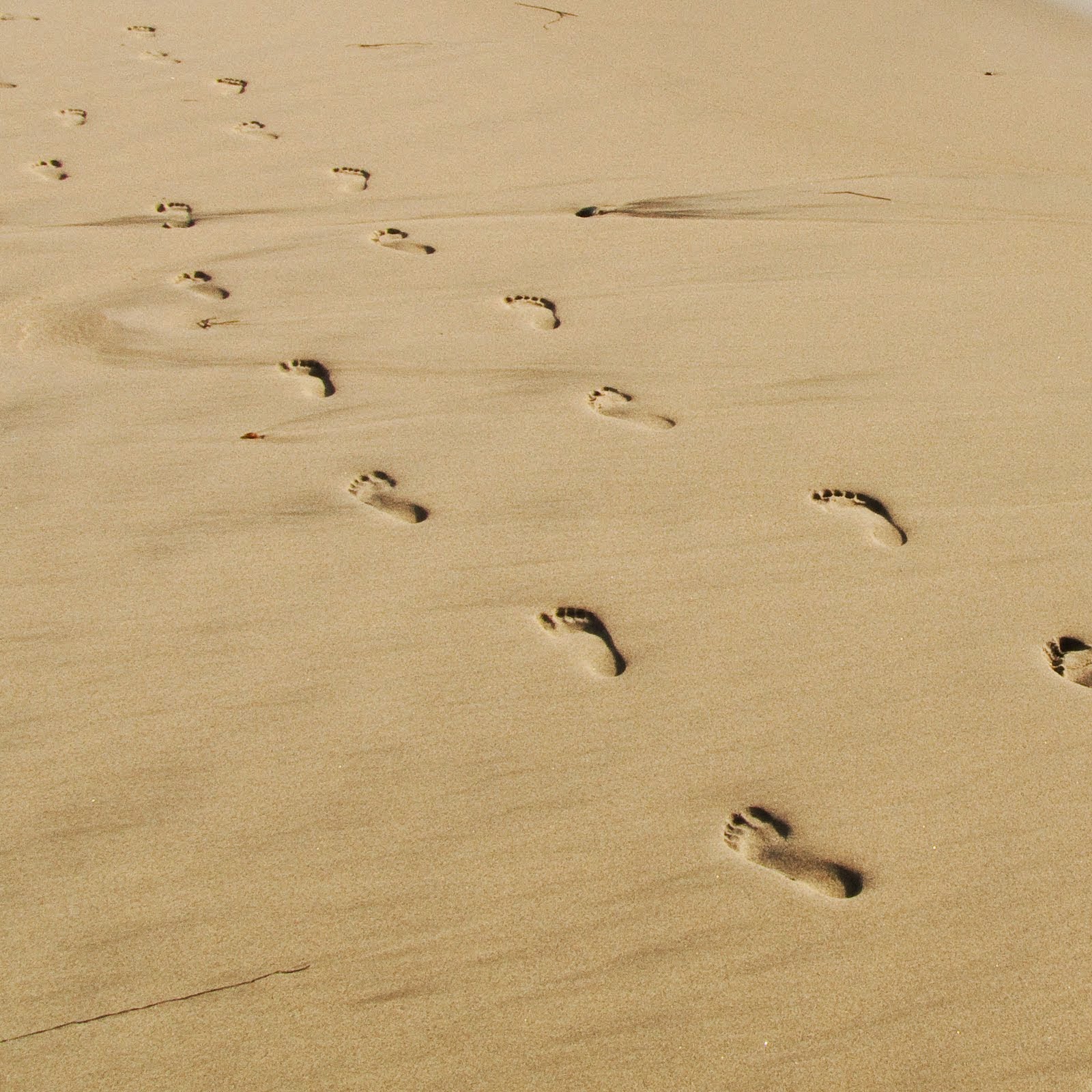 footprints that once etched the sand next to the Master’s were now walking precisely in His steps. Inside His large footprints were the smaller prints, safely enclosed. She and Jesus were becoming one; this went on for many miles.
But gradually she noticed another change. The footprints inside the larger footprints seemed to grow bigger. Eventually they disappeared altogether. There was only one set of footprints; they had become one. Again, this went on for a long time.
Then something awful happened. The second set of footprints was back. This time it seemed even worse than at the beginning. Zigzags all over the place……stop, start…..deep gashes in the sand……a veritable mess of prints. She was amazed and shocked. But this was the end of the dream.
The lady went to the Lord in prayer, seeking to understand: ‘Lord, I understand the first scene with zigzags, fits, starts, and so on. I was a new Christian, just learning. But You walked on and helped me learn to walk with You.”
“That is correct,” replied the Lord.
“Then, when the smaller footprints were inside Yours, I was actually learning to walk in Your steps. I followed You very closely.”
“Very good. You have understood everything so far.”
“Then the smaller footprints grew and actually filled in Yours. I suppose that I was actually growing so much that I was becoming more like You in every way.”
“Precisely.”
“But this is my question, Lord. The footprints went back to two, and this time it was more chaotic than at the first. Was there a regression in my life?”
The Lord smiles, then laughs. “You didn’t know?
He says.  “That was when we danced.”
Excerpt from Dutch Sheets’s  “The Pleasure of His Company”

t0324x2814awh
Related Content
Pleasure of His Company, The: A Journey to Intimate Friendship With God