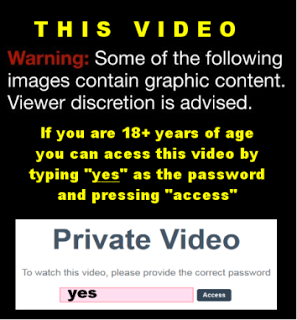 WATCH! Warning Graphic Content- Murdering Babies and Selling their Body Parts? Is this what it has come to? Dear God, End Abortion Send Revival Part 2
When the topic of abortion is heard or talked about, many discuss the perspective from the mother’s view, and her rights. What about the baby? One man delivers a powerful reality by declaring a spoken word of what it would be like for a baby to share their views while in a mother’s womb.
The events and atrocities of innocent bloodshed that are taking place behind the doors of Planned Parenthood are evil. Imagine being a minor; 14 or 15 years old and realizing that you are pregnant. Where does one go? If an underage girl goes to Planned Parenthood seeking counseling services, one would think she would receive guidance in order to make the best decision. When an individual posing as one seeking counseling and guidance about an abortion in a Planned Parenthood counseling office, the guidance was quite the opposite. “So as long as they just lie and say ‘Oh, he’s fifteen, sixteen.’ You know, as long as they don’t say ‘fourteen’ and as long as it’s not too much of an age gap……If they’re fourteen and under just send ‘em right there if they need an abortion”.
Young girls are seeking guidance about their pregnancies and they are being encouraged to have abortions. Sherri Shepherd, former co-host of The View, shared her own realities of a 17 year old woman seeking help. “There are teenage girls out here who I have to speak to that, because I was one of them… I went to Planned Parenthood. They actually were encouraging me to have the abortion, even when I had second thoughts.”
These instances are not the first occurrence. Some may be aware of the past events involving Kermit Gosnell and the medical services he provided in Philadelphia, PA. According to Ann McElhinney, ‘Kermit Gosnell has killed more people than Gary Ridgeway, John Wayne Gacy “The Zodiac Killer”, AND Ted Bundy combined. In a 30 year killing spree, it is thought he has killed many thousands of babies.”Preparations are in the works to produce a major motion picture documenting the atrocities carried out by Kermit Gosnell and making them known to the public.
We do not have to continue to allow these evils to continue in the land. These truths involve all of us and affect each and every one of us.  Louisiana Senator David Vitter shared this staggering reality when he stated, “Planned Parenthood has made a profit every year since 1987, including a $63.4 million return in 2009. There is no justification for subsidizing Planned Parenthood profitable venturing with tax payer dollars…” It is for us as the Church to cry out to God and seek His face believing for Him to stop these evils from taking place and ending abortion in the land. Watch and hear the full stories and conversation of what is taking place, and so much more. Greg and John shared in this segment.
See more, related content and articles for this article.

DORITOS ATTACKED AT SUPER BOWL, saying they HUMANIZED A BABY!, by NARAL, National [PRO] Abortion Rights Action League, allowing the audience to see the baby in their mother’s womb.