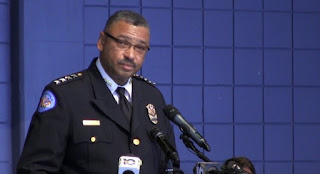 LISTEN NOW! A monumental and historic event has taken place in Pensacola Florida. The newly appointed Chief of Police has been chosen: Chief David Alexander III. This is not an event to casually notice or to simply look over. On the contrary, it is important to note that in the nearly 200 year history of the Pensacola Police Department, this is the first African American Chief of Police.

Many prayer meetings within the church have happened repenting for the words of racism that have been preached behind pulpits. Crosses have been burned in people’s yards solely because of the color of their skin. This was evil. With Pensacola being the 1st Settlement in America, the spark of revival has taken place on the Gulf Coast that can spread across the entire nation.

Specific individuals were invited by the Chief to take part in the events. One of these to attend was Bishop Donice Brown. Bishop Brown’s grandfather was the first African American to be ALLOWED to deliver wood to the paper plant in Pensacola. In the same line of seating was the first African American to be Chief of Police. That is a significant gap from being allowed to deliver wood to being chosen as Chief of Police. The events that have occurred within Pensacola, Florida regarding the new Chief highlight that God is a just God and an answer to many prayers has taken place.

Many community members, leaders and the Alexander family were present at this historic occasion. The Chief’s son, David Alexander IV, shared a profound perspective of his father’s recognition, “This wasn’t really his actual goal. His actual goal was to change lives in Pensacola and the position just came with it.” Married for nearly 30 years, the Chief’s wife, Alquin Alexander shared, ‘This is history. We’ve never had an African American in this position.’ Many city leaders were present as well including Mayor of Pensacola, Ashton Hayward, and Pensacola City Council Members: P.C. Wu, Charles Bare, and Gerald Wingate. Pastor Len Ballenger and wife Pam, of Jubilee Church were also present. Pastor Len shared encouraging words regarding the new Chief by stating, “The Bible says ‘righteousness exalts a nation’. Anytime we have leadership in our communities, our nation, that serve God, that love God; that is the greatest benefit because it opens the door for God’s hand to bless us.”

As the entire gathering stood in applause and cheers, it was an exciting moment to see what was taking place before our eyes. The roar of those present was a genuine reminder of the roar that took place in the Pensacola Bay Center nearly 14 years ago. It was then that the issue of racial profiling by law enforcement was addressed by Greg Lancaster, who was a former law enforcement officer himself, and ultimately repented for and received. The entire audience of thousands roared in response and applause as many hearts were impacted. It was 14 years later, from that moment, that the City of Pensacola said we want the head office of our police to be the first African American Chief of Police.

As the prayers for the Chief and the City were being shared, it was a crucial moment to connect what God is doing and saying; “The Seat of the Righteous will rise and the seat of evil will come down.” It is truly exciting days that are being witnessed today. Watch the full story, more of the interviews of those who were present, and so much more. Greg and John shared in this segment. Also shared in this segment: city council, mayor, repentance, racial profiling, Judge Pat Kinsey, Cheryl Jones, Kimberly Mercy, Lieutenant Henry Causey, Jamie Cochran and the Lutheran Services of Florida, Ferguson, history, restoration, and prayer.

When we know better, we always try to do better.  Retractions & Restatements
WATCH! How to Be a Civil Chrstian in Civil Land; Politicians pointing out what is not right
WATCH! Pensacola Florida’s First African American Chief of Police: Chief David Alexander III