February 17, 2016
Blogger Import
Government Mountain, Original Intent of America, Original Intent of The U.S. Constitution
LISTEN NOW! Our nation has suffered a tragic loss. After serving as a Supreme Court Justice, Antonin Scalia has passed away. Known as a man with conservative viewpoints on many topics, he has been a bold defender for the 1st Amendment, the 2ndAmendment, and the Church. We not only remember the significant presence of his time on the bench, but many also are rememberingthe tragic loss of this man.


CBN’s Caitlin Burke was able to talk with Brad Jacob who not only is from the Regent University School of Law, but Jacob also studied under Justice Scalia while he was going to the University of Chicago Law School. Jacob remembers Justice Scalia by sharing, ‘Probably no one has affected my teaching as a law professor, both in substance and in style than Antonin Scalia. He was the best teacher I ever had in my life. Not all brilliant people are good teachers, but he was.’ Jacob also continues to share the significant impact that he remembers about Justice Scalia’s response to the Constitution, “What was key was not whether he was conservative or liberal. What was key was his approach; which is to say, “Let’s look at what the Constitution of the United States actually says”. Instead of Justices making up these 3 part tests, and 4 part tests…Scalia significantly moved at the Supreme court in the direction of saying, “Our job is to look at the word and history of this document and do what it says instead of what we want.”
Looking at the present situation of the Supreme Court, in the now absence of Justice Scalia, there are now 8 Justices which opens the possibility of having 4-4 ties. When Justice Scalia was serving on the bench, there were 9 Justices. The additional 5 vote in any given matter would keep potential ties from occurring. “When the courts split 4-4, it’s as if they never heard the case.” What does it mean now with this vacant seat in the Supreme Court?
When we understand that Supreme Court Justices are appointed by the President we can recognize the significant impact that President Obama has upon this vacancy. “His death gives President Obama the opportunity to seat his third Supreme Court Justice after earlier appointing Sonya Sotomayor and Elena Kagan.” These Justices have been appointed to their positions to serve by the President that appointed them and their term is for life.
Often times, the American Public looks at a judge based on the outcome of a particular trial. This is not an accurate perspective. When a case is presented before the courts, the presiding judge is to make a decision based on the culmination of facts, evidence and statements from witnesses. Witnesses can be discredited, evidence can be wrongly tampered with, or a law enforcement officer can contaminate a scene. After all of these possibilities, a judge still has to be able to make a decision based on what is presented to them.  Justice Scalia has commented on this paradigm and reminds us, “In this job, it’s ‘garbage in garbage out’. If it’s a foolish law, you are bound by oath to produce a foolish result because it’s not your job to decide what is foolish and what isn’t. It’s the job of those across the street (Congress). So don’t judge judges unless you really take the trouble to read the opinions to see what provisions of law were issued, and what they were trying to reconcile, and whether they did an honest job of reconciling them…”
We have come a long way from how our Founding Fathers had originally designed the Judicial Branch of government to operate. Founder of Wallbuilders, David Barton, shares as he reads the original intent that can easily be found in the Federalist Papers. Particularly, he shares, “The Judiciary is beyond comparison the weakest of the three departments of power…has no influence over either the sword or the purse; no direction either of the strength or of the wealth of the society, and can take no active resolution whatever. It may truly be said to have neither force nor will.” Barton continues to share from the wisdom of Thomas Jefferson who understood the dangers of allowing the Constitution to simply be interpreted and manipulated instead of simply applying what is written. “The Constitution, on this hypothesis, is a mere thing of wax in the hands of the Judiciary which they may twist and shape into any form they please.”
Who we decide to be our next President will not only be the one presiding over our nation, but also the one who will appoint our next member of the Supreme Court Justice who will decide on matters regarding the Constitution. Watch this full report to get a better understanding of the Original Intent of our Constitution, The Supreme Court, Justice Antonin Scalia, and so much more.
screen capture from cbn.com
WATCH FULL PROGRAM! 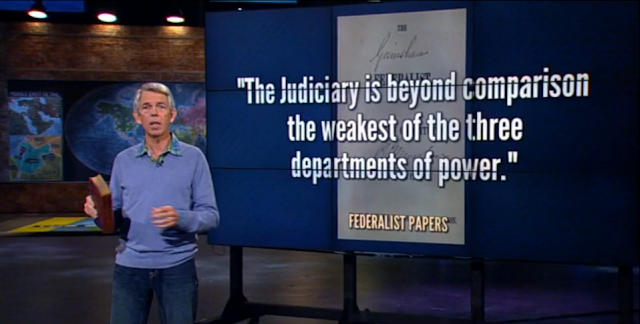 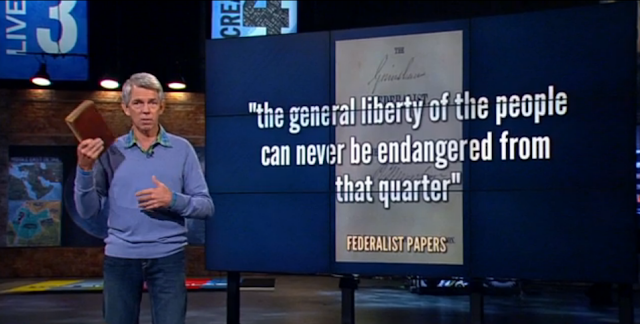 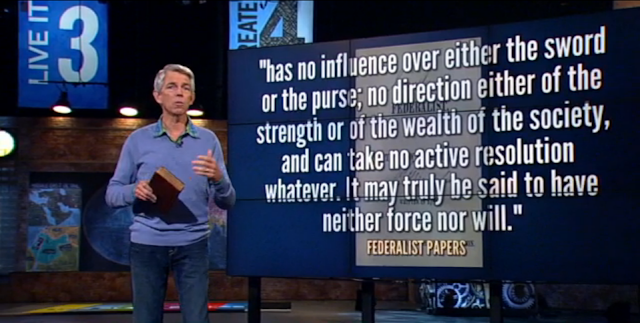 “has no influence over either the sword or the purse; no direction whether of the
strength or to the wealth of the society, and can take no active resolution whatever, It may be
said to have neither force nor will.”
The Federalist Papers 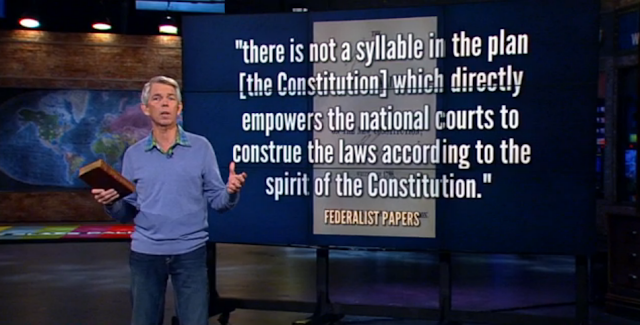 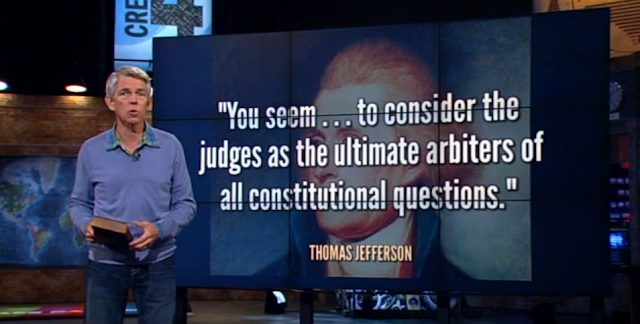 “You seem…to consider the judges as the ultimate arbiters of all constitutional questions.”
Thomas Jefferson 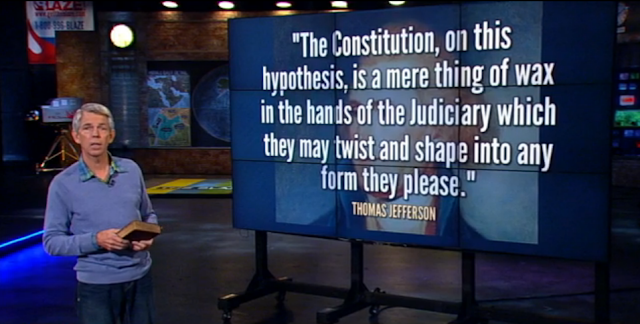 “The Constitution, on this hypothesis, is a mere thing of wax in the hands of the Judiciary which
they may twist and shape into any form they please”
Thomas Jefferson 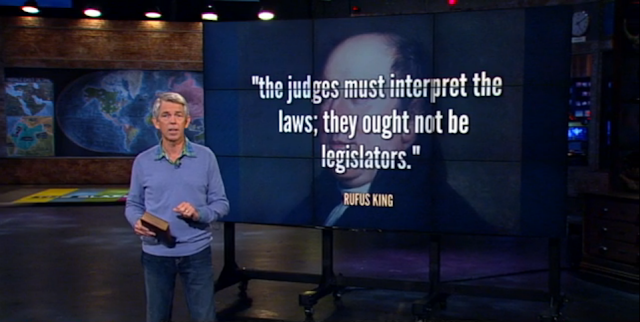 “the judges must interpret the laws; they ought not be legislators”
Rufus King 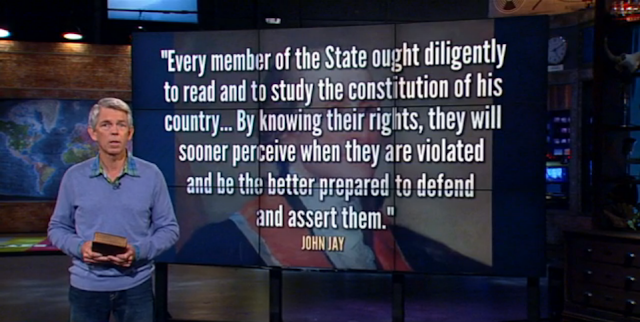 “Every member of the State ought diligently to read and to study the constitution of his country…By knowing their rights, they will sooner perceive when they are violated and be the better prepared to defend and assert them”
John Jay 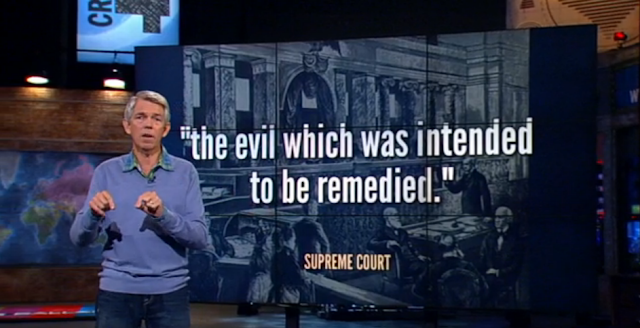 Your Vote Is Your Seed

WATCH! Capitalism, Communism, & Socialism; What does God’s Word say about it?