October 13, 2016
Blogger Import
Civil Christianity, Education Mountain, Government Mountain, Original Intent of America, Original Intent of The U.S. Constitution
LISTEN NOW! There once was a day in the school rooms of America where Americanism versus Communism was taught. As it was once a requirement to graduate high school, today most don’t even know the difference. Because of this, we are in danger of considering the idea of the government providing our every need as an acceptable option. If we don’t know what Communism looks like, we can take one look at China to get a better understanding. The private citizens don’t own anything. The government owns everything. At any given moment, the government can decide to take the very land that your home is on and remove your home AND your family. Is this what we want?

When historian David Barton and Congresswoman Michelle Bachmann sat down to discuss the Biblical perspective of Communism and Socialism, they bring to light many important factors about what it is and most importantly, what it isn’t. Some may assume that the gathering of the Church, “having everything in common” and “selling all their goods”, as described in Acts 2:44-45 could be interpreted as a “Socialism-type environment”. But, by looking a little further, we get a clearer understanding of this reality.

At this time, believers were selling their possessions and giving to others in need. When Ananias sold his property in Acts 4:5, Peter responds by asking, “Didn’t it belong to you before it was sold? And after it was sold, wasn’t the money at your disposal?” This highlights that 1) the government did not own the property, and 2) he had the freedom to do what he wanted with the property; both highlighting that this was not a Socialism-like economy.

When the Pilgrims made their way from Europe to what ended up being Massachusetts, they understood that each man had to work to provide for himself. Contrary to popular belief, some believe that the Pilgrims simply stole the land from the Native Americans. This is not the true story. Bachmann and Barton share the inside story based on actual documents and agreements used in those very moments that highlight what actually took place. 1 Timothy 5:8 reveals, “Anyone who does not provide for their relatives, and especially for their own household, has denied the faith and is worse than an unbeliever.” This was the very scripture that the Pilgrims stood upon as they began their new journey in the New Land. The very words of Paul to the Church in Thessalonica focuses more in detail about this matter in 2 Thessalonians 3:6-15.

The concept of Socialism encourages the mindset of having all of your needs met by the government, instead of providing for yourself and your family. Simply put, Socialism is not a Biblical principle. It is vitally important that we know the difference between Socialism, Communism, Marxism, and Capitalism. The very freedoms that we are afforded in America nurture and encourage the abilities and talents of all Americans. Because we no longer understand the very principles of ideas such as Communism and Socialism, we inaccurately view the very ones who were against these teachings. Dr. Martin Luther King, Jr. was one of those who did not support ideas such as Communism. But if you were to look at many of the voices today, one may think otherwise.

Presently, there are systems in place by our government that limit individuals from reaching their full potential. There is nothing wrong with receiving provision from the government, but some of these very resources put limitations on one’s own earnings. If one were to achieve higher earnings, then the entire resource is removed. This causes some individuals to not desire more for themselves or their families. We should never hold back resources from someone. We need to stop punishing people for not being socialists.

Today, it is a norm to have a young adult on their parent’s insurance plan until the age of 25. This was not always the case. We are also seeing the average work week in America be progressively shortened and shortened. What does this cause? Look at Greece. How can we expect our younger generation to cultivate a healthy work ethic with the perception that the government is going to provide everything? This is idleness. 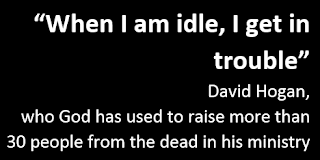 Paul witnessed this very reality when he visited the city of Athens. His journey was chronicled in the Book of Acts. Acts 17:16 reveals Paul’s initial reactions, “While Paul was waiting for them in Athens, he was greatly distressed to see that the city was full of idols.” After Paul proceeded to share the Gospel with all who were present, they were surprised at this “new teaching”. But, when you look at what many of the people of Athens did in their daily lives, it reveals why. Acts 17:21 states, “(All the Athenians and the foreigners who lived there spent their time doing nothing but talking about and listening to the latest ideas.)” Are we not doing the very same thing in America? If our televisions are talking to us, if we are texting back and forth to each other, if we are spending all our time just in conversation, are we any different?

When we are idle in our lives, it causes idols to rise up in our hearts. Having idols in our lives violates the first and second commandments from God. The very existence of the Ten Commandments convicts the reality of idols in our hearts. We cannot have both God’s law written on our hearts and idols. It is one or the other. While we are experiencing an increased environment of idleness in America, it is no surprise that we are seeing the Ten Commandments being removed from government buildings and court rooms across America.

As the Church, we must have a Biblical Worldview and a Biblical understanding of matters such as these. When we understand what God says about these principles, we are better equipped to make decisions that line up with the heart of God, and influence those around us to do the same. Hear the full story of this important matter, allow your understanding of history to be radically changed, and so much more.

Lessons Learned From The Vietnam War: We Can Win A Nation With The Gospel

“A lot of people Chose Quail when God Really Wanted Them to Have Manna”, David Barton Gives Wise Christian Perspective of Elections