Revisiting’ the Shack’ within our own hearts; Sitting down with William Paul Young, Author of “The Shack”

December 13, 2016
Blogger Import
Arts & Entertainment Mountain, Faith, Religion Mountain
LISTEN OR WATCH NOW! As the book “The Shack” is about to be released in cinematic theaters, many are re-visiting the powerful story that is read in the pages of the New York Times best-selling book, “The Shack”. What some may not be aware of is the powerful journey that took place in the life of Paul Young, who authored the book. Host of ‘Life Today’, James Robison was able to sit down with Young and not only talk about the story, but also the story behind the story.
Before Robison begins discussing the power of the book, he shares how this book has impacted his own life and that he read the book in less than 48 hours. “The Shack is where people get stuck and we need a meeting with God, where we’re stuck, if we’re ever to get unstuck.” This is the storyline of what took place to the book’s main character, “Mack” and how he was led to face some of his own difficult realities in his life. In Mack’s journey, he encounters the Trinity, the Father, the Son, and the Holy Spirit. As Robison continues to recount what Mack learns on his journey, “It’s not about religion, it’s about relationship.”
The author of the book, Young, had his own trials and failures; in his marriage and life. Looking back at what transpired through the entire journey, Young recounts his wife’s response to their overwhelming journey. “The pain was hard, the failure is not right…but this man [Young] is worth it”. This is where we see the transforming power of God for the reality that it is; greater than all the pain and hurt that we experience in our lives. It is through relationship with the Father, Son and Holy Spirit that we see His miraculous hand of healing in our lives.
As Young points out the importance for each of us to be brought into relationship with the Father through Jesus Christ, he also points out how the portrayal of The Father in the book has challenged many readers. “One of the dominant images in the book, is that Papa has nail scars in his wrists, The Father”. As Young points out, it is in 2 Corinthians 5:19 that we read, “that God was reconciling the world to himself in Christ, not counting people’s sins against them.”
As Young walks through the importance of see God as the Father, he compares the different use of the term “Father” in the Old Testament compared to the New Testament. ‘The word ‘father’ is only used 15 times in the entire Old Testament, and its only used in a general sense.’ When he points out its mention in the New Testament, he shares, “John’s Gospel uses the word ‘father’ over 100 times; and he uses it personally”. This understanding challenges our perspective of who the Father is with His desire of us to know Him as He truly is. Young continues to express, “That is so exploding our old concepts and precepts that Father, Son and Holy Spirit are in relationship; and they come to dwell in me as a habitation, and not just a visitation.”
As powerful as this story has been in its written form of “The Shack”, it is now about to be released in theaters. Some have concerns that the character of “Papa”, The Father, is portrayed as a woman. With this in mind, it is important to look at Genesis 1:27, “So God created mankind in his own image, in the image of God he created them; male and female he created them.” We can often read things with a perception that wasn’t the original intention of how they were originally written. As Young also points out, “Imagery was never intended to define God”.
The Shack is a riveting story that will deeply impact all of those that are not only able to read it, but now also see the movie. See the full interviews with Paul Young, more on the power of God’s presence in our lives, the story in Young’s life that birthed the book, and so much more. Also shared in this segment: shame, relationship, tragedy, Creation, trust, love, joy, brokenness, and restoration. Greg and Steve shared in this segment.
youtube.com/Lionsgate Movies 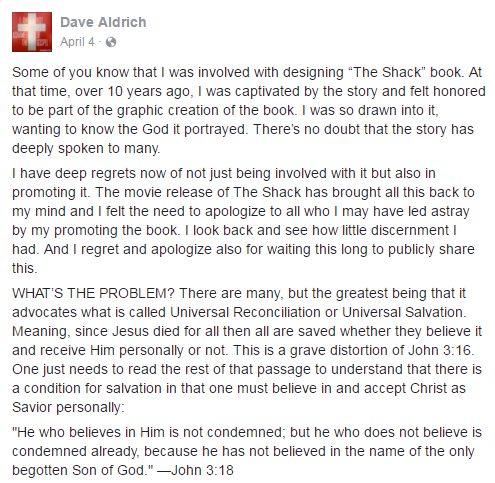 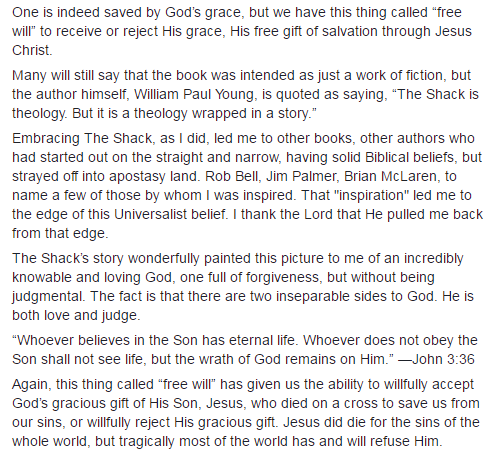 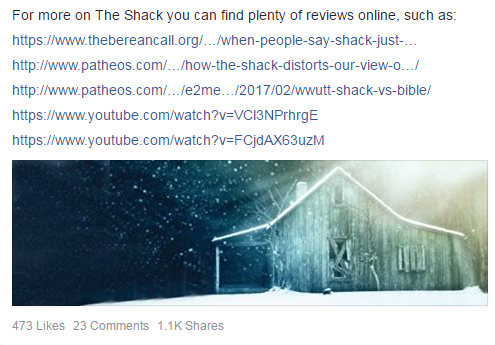 WATCH! The Shack; The Movie, The Book, The Author