September 21, 2017
Blogger Import
Crisis, Faith, Hope, Love, Radical Islam in America, Radical Islam in the World, Religion Mountain
LISTEN NOW! (Or WATCH FULL PROGRAM!) Many nations have taken note at the new changes that have taken place in America since President Donald J. Trump has taken over leadership in America. In the most recent General Assembly of the United Nations, the 193 members of the United Nations could not help but take note at the profound words that President Trump delivered in his first speech to the General Assembly. As the President made bold comments on many of the looming topics happening throughout the world, he first wasted no time commenting on the significant changes that have taken place in America since he has taken over the role of President.

“The stock market is at an all-time high — a record.  Unemployment is at its lowest level in 16 years, and because of our regulatory and other reforms, we have more people working in the United States today than ever before.” While the national debt has been a continual topic of discussion in many outlets, President Trump boldly declared his decision to increase funds into the Nation’s Military.  “And it has just been announced that we will be spending almost $700 billion on our military and defense. Our military will soon be the strongest it has ever been.”  This is an unavoidable change of pace compared to the recent administration that repeatedly lowered the funding of America’s military. 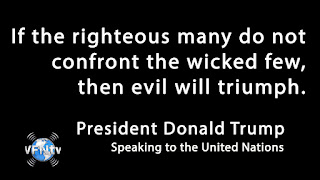 President Trump understands that in this hour, the increasing amounts of global threats are unavoidable. Terrorists and extremists have gathered strength and spread to every region of the planet.  Rogue regimes represented in this body not only support terrorists but threaten other nations and their own people with the most destructive weapons known to humanity.  As the President continues his point, he highlights how these dangers are not limited to terrorism, but also spread across the globe through tentacles of drugs and weapons.

With the understanding of these wide spread threats, the President reminds all the nations in attendance that the original intent of the United Nations was to foster peace, and to do this, each of its members would focus on their own strength. We do not expect diverse countries to share the same cultures, traditions, or even systems of government.  But we do expect all nations to uphold these two core sovereign duties:  to respect the interests of their own people and the rights of every other sovereign nation. This is the cornerstone of success within the United Nations. It is through this avenue that each nation would experience their own prosperity. “Strong, sovereign nations let their people take ownership of the future and control their own destiny.  And strong, sovereign nations allow individuals to flourish in the fullness of the life intended by God.” While these embody the values held in America, all nations should be able to experience such things.

In this time in history, President Trump comments on the anniversary of one of America’s founding documents, the United States Constitution, and how its values carry out these beliefs. “We are celebrating the 230th anniversary of our beloved Constitution — the oldest constitution still in use in the world today… The greatest in the United States Constitution is its first three beautiful words.  They are: “We the people.” The President understands the many generations that have gone before us that were willing to lay down their lives in sacrifice for these freedoms to be kept. These ideals do not stop with his leadership, but continue. “I was elected not to take power, but to give power to the American people, where it belongs.” As the President echoes a phrase that has been stated many times since his Presidency began, he also calls all nations to imitate his actions. “As President of the United States, I will always put America first, just like you, as the leaders of your countries will always, and should always, put your countries first.” 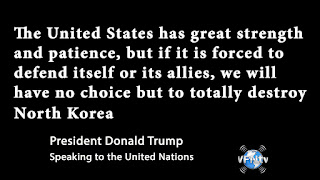 America’s ideals and values have been epitomized in the actions that have been carried out in many of its campaigns across the globe. “We want harmony and friendship, not conflict and strife.  We are guided by outcomes, not ideology.” As the President states, America has sought to help many nations in their times of great need and offer continuing economic support. Taking this into consideration, President Trump understands that not every nation will abide by these beliefs. In fact, some nations are quite the opposite. “The scourge of our planet today is a small group of rogue regimes that violate every principle on which the United Nations is based.” With this understanding, the President begins to boldly highlight the realities that are being made known because of North Korea.

Taking into consideration only a handful of recent atrocities carried out by North Korea, the President calmly states the reality that North Korea faces lest it changes its course, along with the responsibilities of the United Nations regarding the matter:

The United States has great strength and patience, but if it is forced to defend itself or its allies, we will have no choice but to totally destroy North Korea.  Rocket Man is on a suicide mission for himself and for his regime.  The United States is ready, willing and able, but hopefully this will not be necessary.  That’s what the United Nations is all about; that’s what the United Nations is for.  Let’s see how they do.

America’s intentions on the matters regarding North Korea could not be any clearer; and the whole world is a witness to these statements. Literally. The President continued to express the one decision that North Korea has. It is time for North Korea to realize that the denuclearization is its only acceptable future.  In response, the United Nations just convened two votes within its Security Council regarding North Korea that resulted in a 15-0 decision to impose sanctions on North Korea. 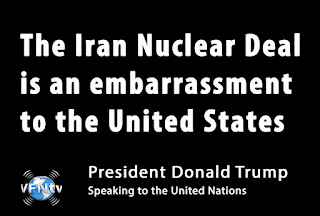 As the strict and forceful words towards North Korea were crystal clear, there were other nations treading the path that contradicted the intentions of the United Nations. Iran. “The Iranian government masks a corrupt dictatorship behind the false guise of a democracy.” The President continues to make clear the realities that Iran has left in its wake of decisions. “It has turned a wealthy country with a rich history and culture into an economically depleted rogue state whose chief exports are violence, bloodshed, and chaos… Rather than use its resources to improve Iranian lives, its oil profits go to fund Hezbollah and other terrorists that kill innocent Muslims and attack their peaceful Arab and Israeli neighbors.” This is the same Iran that America entered in to negotiations with during the last administration that resulted in the Iran Nuclear Deal. “We cannot let a murderous regime continue these destabilizing activities while building dangerous missiles, and we cannot abide by an agreement if it provides cover for the eventual construction of a nuclear program.” 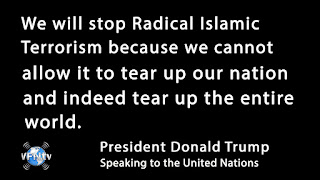 President Trump has continually voiced his thoughts towards this deal, and his thoughts haven’t changed. “The Iran Deal was one of the worst and most one-sided transactions the United States has ever entered into.  Frankly, that deal is an embarrassment to the United States…” Like North Korea, Iran has its own list of evil atrocities that have been carried out. President Trump comments on his trip to Saudi Arabia and his address regarding Islamist extremism. “We agreed that all responsible nations must work together to confront terrorists and the Islamist extremism that inspires them. We will stop radical Islamic terrorism because we cannot allow it to tear up our nation, and indeed to tear up the entire world.” The President is carrying out swift actions to combat future advancement of terrorist organizations. As he comments on operations in Afghanistan, he points to how his decisions have caused devastation to ISIS. “In Syria and Iraq, we have made big gains toward lasting defeat of ISIS.  In fact, our country has achieved more against ISIS in the last eight months than it has in many, many years combined.” 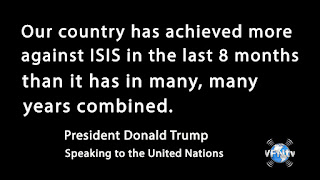 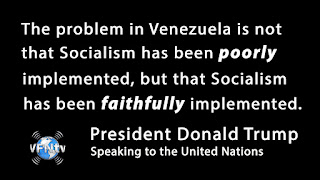 As the President comments on the free falling economy of Venezuela, the starving people, and the oppressive leadership of Nicholas Maduro, he calls out the obvious effects of a Socialistic government. “The problem in Venezuela is not that socialism has been poorly implemented, but that socialism has been faithfully implemented.” The decisions of the Venezuelan government are not anything new considering the long history of Socialistic regimes. “From the Soviet Union to Cuba to Venezuela, wherever true socialism or communism has been adopted, it has delivered anguish and devastation and failure.  Those who preach the tenets of these discredited ideologies only contribute to the continued suffering of the people who live under these cruel systems.” 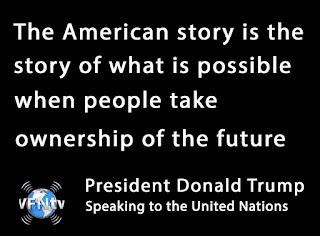 The President continues to highlight the urgent matter of each nation’s sovereignty, remembering the decisions of past global leaders, and points to the future.“Do we love our nations enough to protect their sovereignty and to take ownership of their futures?  Do we revere them enough to defend their interests, preserve their cultures, and ensure a peaceful world for their citizens?” As America has continually fought for its own beliefs and values, its history is a testament to the outcomes that materialize. As the President addresses, “…the American story is the story of what is possible when people take ownership of their future.  As America has fought for its values, the President invites all nations to fight for the values that each nation embodies. “Now we are calling for a great reawakening of nations, for the revival of their spirits, their pride, their people, and their patriotism.” With this encouraging call to action in our ears, the President speaks to all our hearts as he closes with these encouraging and uplifting words; “So let this be our mission, and let this be our message to the world:  We will fight together, sacrifice together, and stand together for peace, for freedom, for justice, for family, for humanity, and for the almighty God who made us all.”