PROPHECY! Trump? “My David I have set aside for this Nation!” Prophecy Kim Clement

September 7, 2017
Blogger Import
Faith, Holy Spirit, Hope, Prophecy, Prophecy for America, Prophetic Words from Oct 2016 to Today
1
LISTEN NOW! (Or WATCH FULL PROGRAM!) Often, when we are watching what is happening, we can be completely unaware that we are also witnessing God’s plans unfold before our eyes. Amos 3:7 reminds us, “Surely the Sovereign Lord does nothing without revealing his plan to his servants the prophets.” Many have been following President Trump’s Administration, but do we know that this is a fulfillment of prophecy? When we look at a previous prophetic word the Lord gave to Kim Clement in 2014, we can see how God is using President Donald Trump. When we understand this prophetic word, we can better understand the events that have taken place as well as events that have yet to happen. 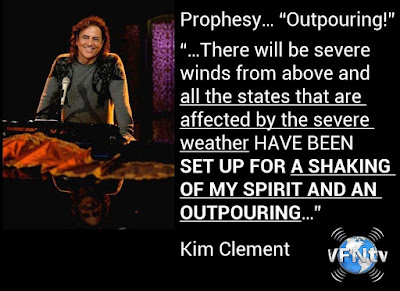 As Kim Clement shared on February 22, 2014, a prophetic vision the Lord gave him, he was shown a man that was standing in Jerusalem. “I was praying for America and I was praying for Israel. Nothing unusual. And, suddenly, going behind my back, going in the form of an arrow, was 100’s of 1,000’s of people. I was stunned by what I saw.” He continues to share how the entire crowd of people imitated him as he raised his hands towards Heaven. When he shouted, they all shouted. “They were one. There were one party of people. It continued until I realized, amongst them stood one that God had set aside to be the leader of this nation.”

Related Content
UNSEEN Prophecy from Kim Clement of Donald Trump Feb 2014
Sean Hannity Full Explosive Rant On Trump Derangement Syndrome
President Trump at the American Legion’s 99th National Convention
President Trump Delivers Remarks Regarding Afghanistan
iAbide.org
Emmaus Road Discipleship
VFN Kingdom Business
Subscribe to our YouTube Channel
Follow us on Twitter
Partner with VFNtv
God Reveals His Plans
Amos 3:7
Related Articles
Pray for our President of the U.S.A., President Donald Trump
PROPHECY! Election of President Donald Trump was in Prophesied 2007; Impeachment Attempts Prophesied in 2014, but God says NO!
“Trump Shall Become a Trumpet…He will whisper when he begins but will shout for my Spirit” Kim Clement shares Prophetic Word over Donald Trump
Prophecy: The Seat of Evil will come Down, the The Seat of the Righteous will Rise; Elijah vs Jezebel and her Prophets
#VFNtvPWDVOCT2016PWDVUSOCT2016F1A2I3T4H5H1O2P3E4S1P2I3R4I5T6
American Veterans, ISIS, President Donald Trump
1

Bible Study in the White House! A MIGHTY ANSWER TO PRAYER!

Sanctuary Cities and the Bible