We are happy to hear the reports that the three Americans that have been held captive in North Korea for over one year has been released to Secretary of State Mike Pompeo, according to CBN News. The three Americans who were captive are Kim Dong-chul, Kim Sang-duk (Tony Kim) and Kim Hak-song. They were all moved from a labor camp sometime last month to be treated, and rest and are now on their way back to America. President Donald Trump tweeted the announcement of their return and that Secretary Pompeo and guests will arrive at Andrews Air Force Base at 2:00 A.M. and President Trump will be there to greet them. 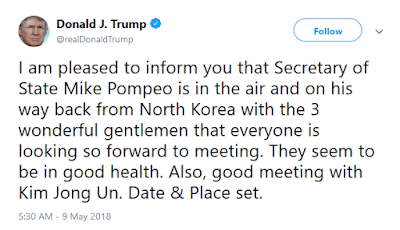 family member of Tony Kim is expressing gratitude to “all of those who have worked toward and contributed to his return home…the support and prayers of friends and even strangers during this challenging year.” We are thankful at VFNKB that prayers were answered for these three Americans to be brought back home to their families.

Secretary Pompeo said this trip is “to put in place a framework for a successful summit.” President Trump did say in his tweet that a place and time have been set for the summit which may happen later this month or in June.

The three men expressed their thanks according to the state department.

“We thank God, and all our families and friends who prayed for us and for our return. God Bless America, the greatest nation in the world.”

A White House spokeswoman said the three former prisoners would be taken to Walter Reed National Military Medical Center in nearby Maryland for further medical evaluation.

America is a Democratic Republic NOT a Democracy